It all started with a mother.

She longed for a child and prayed fervently to God from the depths of her heart. The priest wouldn’t listen to her – he accused her of being drunk. But God heard her prayers, and she returned to that priest several years later with a young son. She told Eli, the priest, that she wanted her son to be raised up in service to the LORD, and so Eli took Samuel as his disciple. 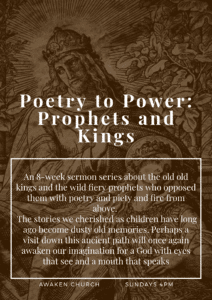 Today’s poem is found at the headwaters of the story. The very first poem in the books of Samuel and Kings (a unified whole in the Septuagint) is spoken by the mother of Samuel. Her poem reverberates across the history of Israel, and is eventually picked up by the Mother of Mary who birthed the King who would reclaim what Samuel saw depart.
1 Sam 2:1-10

My heart rejoices in the Lord.
My strength rises up in the Lord!
My mouth mocks my enemies
because I rejoice in your deliverance.
2 No one is holy like the Lord—
no, no one except you!
There is no rock like our God!

3 Don’t go on and on, talking so proudly,
spouting arrogance from your mouth,
because the Lord is the God who knows,
and he weighs every act.

4 The bows of mighty warriors are shattered,
but those who were stumbling now dress themselves in power!
5 Those who were filled full now sell themselves for bread,
but the ones who were starving are now fat from food!
The woman who was barren has birthed seven children,
but the mother with many sons has lost them all!
6 The Lord!
He brings death, gives life,
takes down to the grave, and raises up!
7 The Lord!
He makes poor, gives wealth,
brings low, but also lifts up high!
8 God raises the poor from the dust,
lifts up the needy from the garbage pile.
God sits them with officials,
gives them the seat of honor!
The pillars of the earth belong to the Lord;
he set the world on top of them!
9 God guards the feet of his faithful ones,
but the wicked die in darkness
because no one succeeds by strength alone.

10 The Lord!
His enemies are terrified!
God thunders against them from heaven!
The Lord!
He judges the far corners of the earth!

May God give strength to his king
and raise high the strength of his anointed one.

The invitation you’re being given with this sermon series is to listen to Hannah’s prophetic poem…to pray again like Hannah, listen again like Samuel, tremble with terror and awe again  like the Israelites at the Word of God.